A large part of my Epic Journey was to do the trip spending as little money as possible, learning to live with less and going without a lot of extra comforts.  Car camping seemed to be my best solution as I am not much of a tent camper.  My first attempt at camping, many years ago, did not go well and I ended up sleeping in the car rather than a tent, so I naturally figured I could drive across country sleeping in my car. 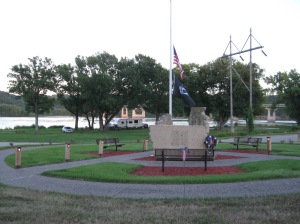 The Dubuque City Park had a lovely veteran memorial.

It was an interesting concept, although not very well thought through.  But Devi was my home during this trip and I did sleep in her several times.  The original concept was to have an air mattress in the back and sleep on that, but I ended up bringing too much stuff and could not do that.  In Dubuque, I slept in the front seat and that proved rather crampy.  After that I would clean out the back seat and sleep there.  That worked a little better.

In future adventures, I will have to re-think the entire car camping process and come up with a little bit better way to do it.  I still feel it is a viable way to camp, it is a lot less expensive than motel/hotels but to just think you can curl up and go to sleep in your car every night, without a plan, is not very smart (no one ever said I was smart when it came to camping).

During the first night of car camping, I stayed in the Dubuque, Iowa, City Park.  It was actually a lovely site right by a river.  I watched barges go up and down the river and heard the strangely comforting sounds of trains passing by in the distance.  The cost was perfect at $12.00 per night and I felt completely safe there.  I would definitely stay there again as it was a truly lovely location. 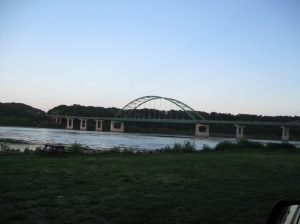 This was the view from my campsite. 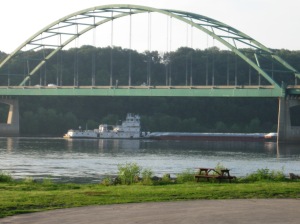 One of the many barges that I watched float on by. 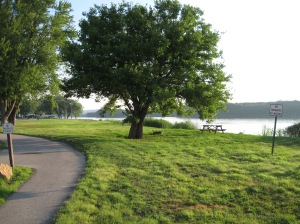 The park was extremely well taken care of. 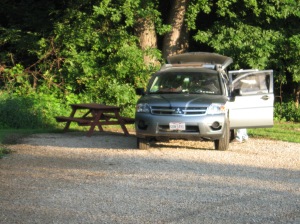 Preparing Devi for what turned out to be a long night of tossing and turning.

A beautiful sunset in Iowa. 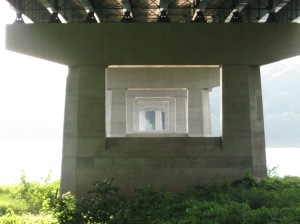 An artistic view of the bridge as I left the next morning. 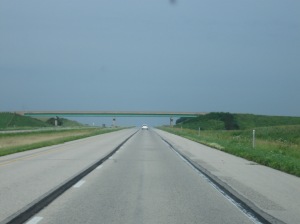 On the road again to the next adventure.

My life seems to be changing daily!